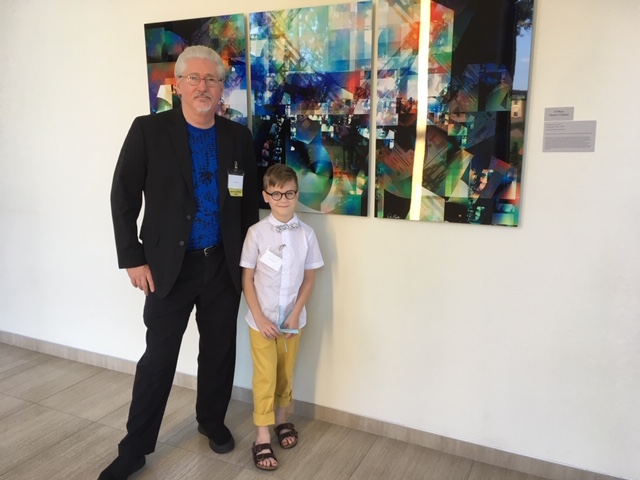 The 3rd Annual pARTnership Exhibit opening reception hosted by the Ben & Maytee Fisch College of Pharmacy was held August 29, 2019 at Brookshire Hall on the campus of U.T. Tyler.  Don Bristow’s Cityscape One received the People’s Choice #1 distinction, and was utilized for the front to back cover of the exhibit program guide.  The guide included photos of all the art in the exhibit.  These photos were taken by Don Bristow with the assistance of staff members from the Tyler Museum of Art.

One of the traditional moments of the reception was a helicopter drop by the artists from the second floor to the atrium below.  Folks below caught the helicopters that each contained the name of a participating artist.  It was suggested that each catcher find the artist named on their helicopter, then be photographed with the artist by their installed artwork.  Don Bristow’s catcher was Alexander Newton, the son of Sandy Newton, co-host of Art Connection of East Texas.  Alexander is a very sharp young man who takes art very seriously.